November 9th marks the 25th anniversary of the fall of the Berlin Wall. When Joachim Loew's German side triumphed in Brazil last July, it marked their first global title as a unified state. East and West only ever met in one World Cup, at the 1974 edition held in West Germany. Of course, East Germany were drawn in the same group as the tournament hosts. In their first and only appearance at the finals, the East shocked the watching world by beating the reigning European champions. 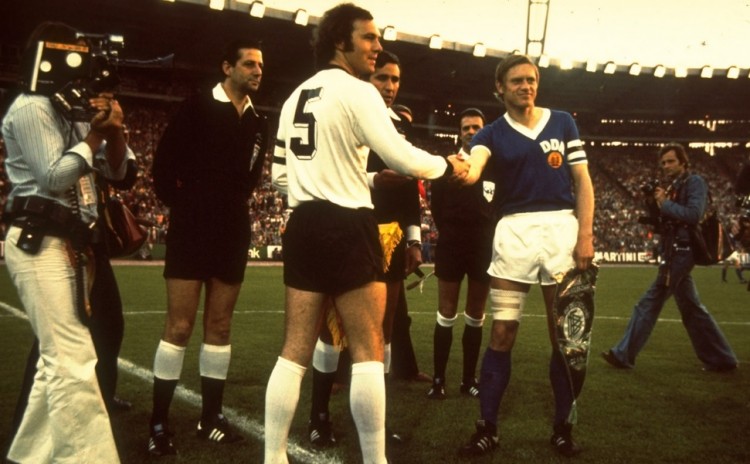 November 9th marks the 25th anniversary of the fall of the Berlin Wall. When Joachim Loew’s German side triumphed in Brazil last July, it marked their first global title as a unified state. East and West only ever met in one World Cup, at the 1974 edition held in West Germany. Of course, East Germany were drawn in the same group as the tournament hosts. In their first and only appearance at the finals, the East shocked the watching world by beating the reigning European champions.

Under the Soviet occupation, organised private clubs were banned but with political motivations in mind, efforts were made to arrange football matches between sides representing the East and teams in the West.

Selections from Saxony and the Soviet Occupation Zone participated in games until, in 1951, the East applied for FIFA membership, a move objected to by the west’s German Football Association (DFB). On 24 July 1952, however, East Germany were admitted as a full member to international football’s family.

Germany had been banned from participating in the 1950 World Cup due to their actions in the Second World War but four years later West Germany triumphed in Switzerland, a tournament the East had not remotely considered entering.

The euphoria of the West’s win however, swept across the border convincing the authorities to enter the qualifying tournament for the following competition to be held in Sweden.

When Wales came to Leipzig in 1957 for the first game, half a million tickets were requested. Officially 100,000 were admitted, but a crowd said to be closer to 120,000 witnessed a 2-1 victory for the home side.

The East Germans ultimately failed to qualify and wouldn’t grace a major tournament until in 1974 they reached the finals to be held on relative home soil in the West.

The USSR refused to participate after boycotting a play-off match against Chile, by now under the newly-installed Pinochet regime.

Security during the tournament was intense after the terrorist attacks at the 1972 Munich Olympics two years before. To add to the headache, fate allowed that both German teams were drawn in the same group.

By the time the third game came around, both teams were assured of passage to the second round, and with the competitive element apparently meaningless, the match itself was anything but. It became more than just a football match but a battle of political ideologies.

West Germany were overwhelming favourites having won the European Championship two years previously, and now playing on home soil. The core of the team was made up of the Bayern Munich side that just weeks earlier had won the European Cup hammering Atlético Madrid in the final.

Perhaps to be expected, huge numbers of East German fans supported the West German side, living as they did under an oppressive communist regime. All East Germans were entitled to a passport from the West and millions would escape across the border in the years before reunification. The rules of FIFA, however, prevented players who had caps for the DFV team from playing for the west. Only 1500 specially selected East German fans were allowed to travel to Hamburg by train.

The game was a disjointed affair until thirteen minutes from time a long ball from defence found Magdeburg striker Jurgen Sparwasser who stole between three German defenders to blast past the great Sepp Maier in the West German goal for the only score of the game.

The result resounded around the globe but in football terms, topping the group gave the East the more difficult path in the second round. Played on a group basis, they were defeated by both Brazil and the Netherlands before securing a draw with Argentina.

Their neighbours, on the other hand, would go on to win all of their remaining games to be crowned world champions.

East Germany failed to reach another finals but the two sides would be paired again in the qualifiers for the 1992 European Championship.

This time events of history would overtake them. With the fall of the Berlin Wall, the country was set to be unified. The East’s opening fixture away to Belgium was therefore played as a friendly while the game against the West, scheduled for November in Leipzig as a celebration of the unification of the DFB and DFV, was cancelled due to rioting in East German football grounds.

On 12 September 1990, Matthias Sammer captained East Germany in its final match scoring both goals as the Germans beat the Belgians 2–0 in Brussels.

Sammer had earned 23 caps with East Germany and within six years, he would be named player of the tournament as the unified Germany were crowned champions of Europe. A further eighteen years later, and Germany have conquered the footballing world.