It's hard to believe now following their humiliation at the hands of Germany, that many considered this was Brazil’s World Cup to lose. Arguably you have to go back as far as 1950, when Brazil last hosted the World Cup to find a squad that had been so unduly expected to win the coveted prize in living memory. The defeat in the final - which became known as the Maracanazo, the Maracana blow - has been recalled many times in recent days, with the ghosts of 64 years ago seemimgly excorcised by the current team's shame, writes Aidan O'Sullivan. 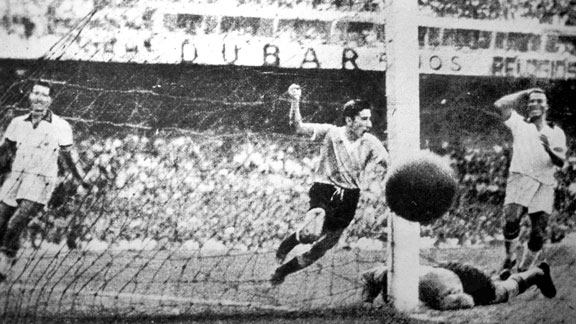 It’s hard to believe now following their humiliation at the hands of Germany, that since they lifted the Confederations Cup this time last year, many considered this was Brazil’s World Cup to lose. A team brimming with confidence, and not least a truly terrifying home form, they hadn’t lost on home soil in over 10 years and that was a meaningless friendly against Paraguay. There was a sense of justification for a Brazilian victory, something theatrical about football’s most glamorous nation reclaiming what was rightfully theirs. The pressure on this team to win trophy was truly immense. In fact it’s hard to think of a squad that had been so unduly expected to win the coveted prize in living memory. Arguably you have to go back as far as 1950, when Brazil last hosted the World Cup. The defeat in the final – which became known as the Maracanazo, the Maracana blow – has been recalled many times in recent days, with the ghosts of 64 years ago seemimgly excorcised by the current team’s shame, writes Aidan O’Sullivan.

The format at that time meant the champions were decided by the outcome of a final group of four, these four teams having played in their own respective pools. Brazil had topped their section featuring Mexico, Yugoslavia and Switzerland as expected and faced Uruguay, Sweden and Spain in the final rounds. By this stage Brazil had hit their groove and demolished Sweden and Spain 7-1 and 6-1 respectively. Going into their last game against second-placed Uruguay, the Seleção simply needed to avoid defeat to ensure the championship was theirs. Uruguay, although only one point behind Brazil in the group, had faced a far more competitive route to the final game. Playing Spain first they had to settle for a 2-2 draw, having come from behind. While in their game against Sweden they managed to win 3-2, scoring the winner in the final few minutes.

The anticipation and preparation from both sides for the decisive game has gone down in legend. Brazil’s confidence going into the match was near ludicrous in its strength. On the eve of the final, Sao Paulo’s Gazeta Esportiva stated rather bluntly ‘Tomorrow we will beat Uruguay!’ That was one of the more humble expressions of what the Brazilian public expected. On the day of the final the mayor of Rio proudly proclaimed Brazil world champions. This was prior to the game itself. It’s an easy assumption to make that the sheer arrogance of the Brazilian public only hindered them, while greatly motivating the Uruguayans. Obdulio Varela, La Celeste’s captain, admitted to buying as many copies of O Mundo as he possibly could, having seen its front page on the day of the final. Featuring a photograph of the Brazil team the caption underneath simply stated “These are the World Champions.” Laying them across his bathroom floor in his hotel room Varela encouraged all his teammates to urinate on them.

On the day of the game, anticipation had reached fever pitch. A figure of 173,850 is considered the official attendance at the iconic Maracana but most agree it surpassed 200,000 when taking into account the thousands without tickets who crammed inside the vast tiers of the stadium. Julio Perez, Uruguay’s inside right, admitted that he was so overwhelmed by the noise and scale of the Maracana when the teams lined up for the anthems that he wet himself. The game began as many expected. Brazil with an early dominance and with the majority of possession attacked the Uruguayan defence in waves. However Juan Lopez, manager of the Uruguayans, had seen how Switzerland had stifled the fluidity of the Brazilian team in the opening match and went about incorporating the Swiss tactics into his own plans. Playing with a four man defence, Lopez instructed his inside forwards to drop into midfield to assist Varela when not in possession and to revert to their normal positions when the opportunity to counter attack arose. This was essentially a pre-eminent interpretation of a 4-3-3 formation.

Mid-way through the first half Varela struck Bigode, the Brazilian left-back. Although both players have downplayed the significance of the punch as nothing more than competitiveness, it is widely considered to have given the Uruguayans a significant psychological advantage. The teams left the pitch at half-time to a 0-0 stalemate. After the restart, Friaca scored for Brazil almost straight away to significantly ease the tension around the stadium. However the Uruguayans had learned how to live with the Brazilians and in the 66th minute Juan Schiaffino did the unthinkable and equalised for Uruguay from a low cross at the near post. It was a landmark moment not just in the match but in Brazilian history. Flavio Costa, the Brazilian manager, remarked that the “silence in the Maracana” was the most stunning aspect of the equaliser “which terrified our players.” The Uruguayan fight-back was not in the script for the Brazilian team or the public. Regardless, a draw was still enough for Brazil to lift the trophy, yet inexplicably, they continued to attack when the momentum of the game was so clearly against them.

Entering the final ten minutes the impossible happened. Alcides Ghiggia, having already set up the first goal, moved into the penalty box from the by-line, and with the Brazilians standing off expecting the low cross, struck a shot at the near post which bobbled in over the line. Ghiggia has taken great joy in referring to his place in Brazilian football with his own analogy “Only three people have, with just one motion, silenced the Maracana: Frank Sinatra, Pope John Paul II and me.” Jules Rimet referred to the stadium’s reaction in a more dour description: “The silence was morbid, sometimes too difficult to bear” In one final reflection of the Brazilians’ arrogance Jules Rimet was left standing in the middle of the pitch after the final whistle holding the trophy for several minutes until Varela was motioned on. Only a Brazilian presentation ceremony had been prepared for.

The aftermath of the final was as theatrical as the build-up. Various Brazilian newspapers refused to print the result and suicides were reported throughout the country. Many of the Brazilian squad were forced to retire such was their vilification. It was ultimately decided to change the home strip of the team in fear of it being jinxed. The plain white jersey was abandoned for a now iconic canary yellow. The term “Maracanazo” – the Maracana blow – was coined. Whenever the Brazilian national team or one of the country’s leading sides are defeated in the bowels of the great stadium the phrase is quickly passed around.

Prior to the 2014 competition, Pelé was asked who he would like Brazil to face shouled they reach the decider on July 13th. He did not falter in his answer. “I would prefer to have a Brazil versus Uruguay final in order that we could avenge our defeat in 1950.” The sense of “injustice” is still very much alive in football’s most besotted nation and the episode has been revived from the history pages in recent days. The quality and pedigree of the current Brazil team was being debated long before their anihilation by Germany but the embrassament is just as profound. This time one newspaper read “Congratulations to the runners-up of 1950… Yesterday we found out what shame really is.” Brazil has a new tragedy.